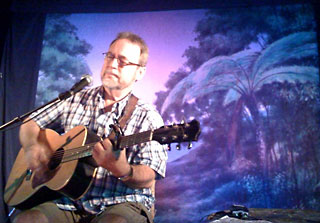 John Williamson has survived and soared in the often cut-throat entertainment industry. His unofficial anthems, tributes to legends and unsung heroes and tender ballads have captured the spirit of the nation in song unlike any other. His honest and passionate songs are synonymous with the country that inspires him, and connect him with his countrymen regardless of age, sex or creed.

Add to this his ability to deliver unforgettable live concert experiences that combine the perfect blend of humour, romance and campfire stories woven together by his music. You can understand why he is one of the most in-demand live performers in Australia.

Along his journey he has been inducted into the prestigious ARIA Hall of Fame, secured 3 ARIA Awards, 24 Golden Guitars, MO Awards, APRA Awards, Platinum and Gold albums and over 4 million album sales to name just some of the recognition he has earnt.
It all started when he penned that classic 'Old Man Emu' back in 1970. From this 'silly' song (as he often refers to it) that went to Number One for five weeks, he has continued to create hits including 'True Blue', 'Cootamundra Wattle', 'Rip Rip Woodchip', 'Raining On The Rock', 'Winter Green', 'Salisbury Street', 'Hawkesbury River Lovin'' and 'Galleries Of Pink Galahs' to name but a few of the 400+ songs written by the multi-award winning songwriter.

His resume and catalogue would make any songwriter envious; not bad for a kid from Quambatook in Victoria's Mallee country.

In January 2012, John Williamson adds to his catalogue with new album release The Big Red, his first all-original release in almost four years.

With the material already tried, tested and proven on John's live audiences, there remains little doubt that the new album will resonate with Australians all over and continue to showcase John Williamson's ability to capture the land, characters and spirit in song.

He continues to be at the forefront of significant events in Australia, presenting the voice of Australia when it is needed most. From the 2011 Rugby League Grand Final through to the 2000 Sydney Olympics, Steve Irwin's memorial, the Bledlisloe Cup, Sir Donald Bradman's memorial, the Rugby World Cup, the first Bali Bombings memorial service and the list goes on. He is ingrained in Australia's history as much as its future.

Accolades and awards though have never been a huge deal to John Williamson; it has always been about the fans to the ever humble ex-farmer. Even after what he has achieved, or what he has been invited to be a part of, he remains nonchalant about it all.

You can call him what you want, Mallee Boy, True Blue or just plain Fair Dinkum; but there is no denying that after more than forty years in the music industry, John Williamson is truly an Australian icon.